Now, you’re thinking, My God, Auralee, are you a vegan? I thought you were so normal. I thought you saved the veganism for the wingy mother character in your books? (That’s what you were thinking, right? No…? Okay, so eating quinoa doesn’t make you a mind-reader after all? I’ll cross that off the benefits’ list.) But, as it turns out, I am not a vegan. I have been in the past, a couple of times, and I do still flirt with the dirty, green side…and it is dirty. (Seriously, I know hardcore earthy types who like a little dirt in their veggies. B vitamins. True fact. I do not endorse this, however. Especially if you grow your own veggies and have dogs…or cats…or birds flying overhead.) I still do use a lot of vegan recipes, though, and Alicia Silverstone says it’s totally okay for me to just hold hands with veganism, and, really, if the actress who played the lead role in 90s classic film, Clueless, says it’s okay for me to do this, then it’s okay, dammit! Sigh. I feel judged. By both sides. Anyway…onto the recipe!

Okay, so before we really get started, I think that maybe I should temper your expectations just a bit. I can’t turn quinoa into some chocolately, syrupy, outrageously delightful type concoction that deserves to have the word orgasm in the name – only unicorn-wizards can do that – but I can make it totally palatable.

SUPER EASY “SHUT UP, IT’S GOOD FOR YOU” BREAKFAST QUINOA

Serves maybe 2-4 (I don’t make a lot of it because it doesn’t last in the fridge past a few days, and my kids still think it’s weird. My husband always says, Make enough for me, but he never eats it, and we’re not making throw away quinoa money. That’s like Oprah money. Seriously, quinoa’s not cheap.)

1/4 teaspoon cinnamon (more if you can take it, baby)

Okay, so dump all of these ingredients in a saucepan, bring to a boil, then simmer for around 10 minutes, stirring occasionally. (I’m not sure if you are really supposed to cover it or not, so I leave the lid askew and that seems to work for me.) Turn off the heat then let it sit for fifteen, twenty minutes.

Now, here comes the important part. Toppings. Now, that I’ve been doing this for awhile, all I put on my quinoa is sweetened almond milk. (Some of you are probably thinking, Huh, why doesn’t she use unsweetened almond milk? To which I say, Why do you want me to be so sad? I thought we were friends.) BUT, if you’ve never eaten quinoa before, or you have and think it’s gross, I recommend putting some maple syrup on top. Really, maple syrup can make anything taste good, and, as time goes on, and you get used to the beauty of the quinoa, you probably won’t need it anymore.

Chase thinks it’s awesome. (The pot is cool. I shouldn’t have to say that, but I don’t want any melted Chases on my conscience.) 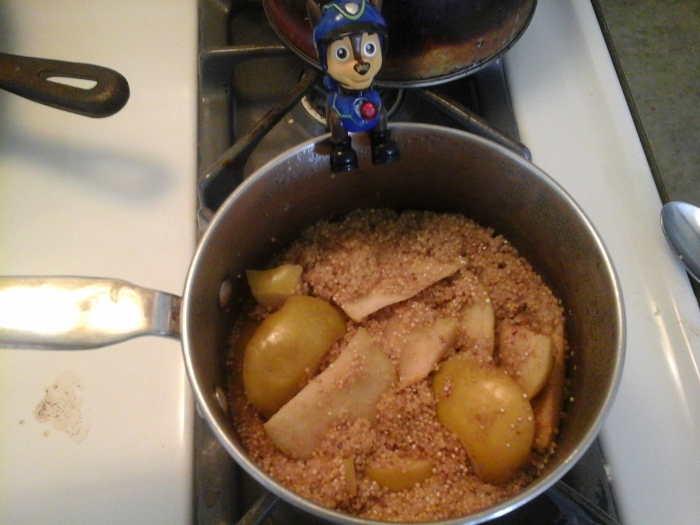 (I was going to put this in a fancy bowl for you, but I’m not going to eat it right now, and I have 3 kids, so, really, we have enough dishes to do.)